Bruce Lee was incredibly and extraordinarily lean. As it happened, his body fat percentage was estimated to be below 3 percent. And to achieve this kind of figure, it entailed arduous labor and extensive effort, discipline, time, and dedication.

Many reports claim that the martial arts artist was truly legendary. Not only that he became famous because of his movies but, he was also an icon of fitness and bodybuilding.

The truth is – Bruce Lee was a serious bodybuilder. He was totally dedicated to his fitness and health. With his impressive track despite his tragic death, his ideologies, regimes, and methods in terms of living a fit and healthy life have become influential in recent times.

Bruce Lee’s overall fitness and health state were very impressive. This is why many people today are very eager to know the martial arts artist’s secrets to a fitter and healthier life.

Based on claims, Bruce Lee did not resort to junk foods when refueling his body and replenishing his energy. So, this is one of the top things that you must avoid when intending to follow his fitness and health plans.


It was further shared that his diet mainly consisted of natural and organic options. He also preferred protein shake juicing and vitamin nutrition supplementing. In short, he focused his diet on sustaining his body into its most ideal state as much as possible.

Bruce Lee was said to focus his diet on Asian cuisines, specifically in Chinese foods. While it was revealed that he sought Western foods as bland, this was not his only reason as to why he preferred and enjoyed Chinese dishes.

According to reports, he thought that Western foods focused more on the protein and fat contents of the dishes as opposed to Asian cuisines. Asian dishes tend to emphasize carbohydrates from rice, pasta, and vegetables, which are all of Bruce Lee’s preferences.

Some examples of Chinese foods that he loved include tofu and beef in oyster sauce. Steaks and livers were also on the list but, he always ensured to have a very balanced approach to his meals. You can try this cookbook for a Bruce Lee diet plan.

While Chinese foods were his preferred meals, it is shared that Bruce Lee had a very balanced diet. If not eating Chinese or Japanese foods or any other Asian cuisines, he is said to ensure every meal to have balanced portions.

His regular diet is said to focus on plant-based carbohydrates and protein-rich sources. Accordingly, every plate is deemed to have equal servings of carbs and proteins.

For plant-based carbohydrates, some of the foods that are said to be Bruce Lee-approved include:

As for his protein sources, pork, beef, fish, hen, and veggies were his “go-to.”

While there are no specific meal plans revealed that Bruce Lee followed, as he was not very strict with his meal and ingredient matching, it is already enough to know what types and kinds of foods he focused on with his diet.

Green Tea also played a huge role in his daily lifestyle. As per sources, Bruce Lee never refused a cup of green tea per day. So, many experts and pros are convinced that his breakfasts and dinners, and even snacks all ended with a cup of green tea.

Aside from drinking cups of green tea, the prominent martial arts artist is also believed to prefer drinking royal jelly and ginseng infused drinks. More often than not, the essences of these ingredients were utilized for teas as well.

By and large, royal jelly is a very beneficial ingredient for the body. It has been established that royal jelly offers enough amounts of vitamins and nutrients that are normally not found in usual dishes.

Along with these factors, royal jelly is also a great source of antioxidants and has anti-inflammatory properties.

Ginseng, on the other hand, helps increase energy levels and reduces the feeling of tiredness. Plus, it is also great for strengthening the immune system as well as several brain functions. And With these benefits at hand, it is only fitting why Bruce Lee consume these regularly. 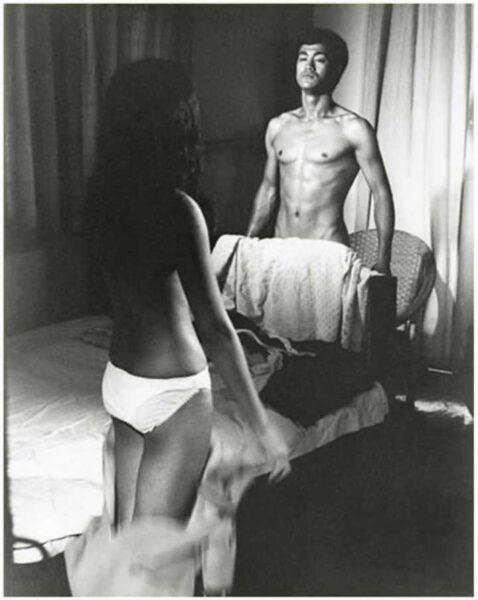 Being mindful of what he eats on a daily basis is one of the attitudes that Bruce Lee had in terms of his diet and fitness. While his pickiness helped him to maintain his ideal weight and body, his eating habits are also one of the most important things that benefited him.

As it happens, Bruce Lee was said to have frequent meals in a day. But, in each serving, the portions were limited and downsized.

Apparently, this kind of eating habit has been deemed as one of the most effective routines in recent times. This is because when you eat smaller portions, it will allow your body to effectively digest the foods and drinks you consume.

While it may make you feel hungry again after a short period of time, the frequency of your meals in a day will eliminate the unnecessary cravings. As a result, you consume much fewer calories and even limit your meal intakes per day.

As mentioned, Bruce Lee avoided junk foods. This means that any processed and inorganic ingredients were out of the picture in his fitness and health regime.

But, to give you a closer look are what specific types of foods he avoided, here are the top three things that he evaded in his diet to achieve his fitness and health goals:

Refined flour is a flour that is, well, refined from whole grain flour. It was shared that Bruce Lee avoided foods that were mainly constituted by this kind of ingredient since they are basically “empty calories.” The idea was to only consume the calories that will benefit his body.

Studies and research also found that excess consumption of refined flours may increase the risks of having irritable bowel syndrome.

The foods that are normally made from refined flour include baked goods like biscuits and cakes. Accordingly, the martial arts artist did not consume any of these goods.

Dairy goods like milk and other consumables that are high in calcium were also said to be avoided by Bruce Lee. And the only dairy products that he consumed were said to be those that took part in his protein drinks. Instead of utilizing fresh milk, he was said to opt for powdered milk in these drinks.

The main idea behind this is that avoiding dairy foods essentially reduces the intake of energy. As it happens, the calcium contents of dairy goods are found to reduce the digestion of fat. And you certainly don’t want this, especially if you are planning to lose weight and shred fats.

Sugar is also another ingredient that Bruce Lee avoided. Any food or meal that is high in sugar was withdrawn from his daily fitness and meal plan.

Many studies and research today found that sugar does no good for your body. Aside from the dramatic increase of cravings, sugar is also the leading cause of obesity.

Not to mention, experts also noted that sugar just deteriorates many aspects of your body and health. And even when you stick to your legal phentermine, this will still not work if you continue to indulge in sweets and sugar.

As per assertions, Bruce Lee was fond of protein drinks and shakes. Smoothies were also included in his list. It was further revealed that he drank two protein drinks or smoothies on a daily basis.

While it was a custom on his daily fitness regime, these drinks only revolved in the following ingredients:

Supplementing his body with essential vitamins and minerals was a huge part of Bruce Lee diet. Aside from keeping his body in its optimum state, this allowed him to have a very strong physique and to effectively protect his internal systems.

Some of the supplements that were known to have taken by the iconic martial arts artist are the following:

While Bruce Lee’s iconic and famous diet and meal plan may sound too ideal, and even perfect, as described by many individuals, which makes it very difficult to follow, the martial arts artist was able to apply this on a daily basis.

The popular saying, “no pain, no gain,” is basically one of the main ideas that one can get from this Bruce Lee Diet. Its overall difficulty and challenge make the diet much more reliable and effective.

So, if you really want to effectively lose weight, or reach a very low percentage of body fat, this regime of Bruce Lee will be very beneficial and helpful on your end.

Alternate Day Fasting 101 – Does It Work for Weight Loss?

The 5 Day Apple Diet Plan: LOSE Up To 9 lbs In One Week